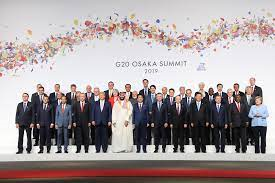 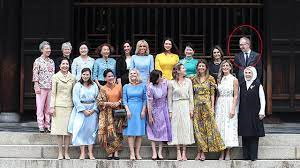 Group photo of the spouses of the G20 leaders

The two-day Osaka Group of 20 (G20) summit closed on Saturday (June 29), and heads of state discussed trade, geopolitics and other issues. The G20 Osaka Summit passed the summit declaration on the afternoon of June 29 and came to an end. Due to the differences between the 20 countries, this summit declaration was a comprehensive product of various compromises: anti-trade protectionism turned into a call for free and fair trade; implementation of the Paris climate agreement turned into reducing plastic waste; fighting the debt trap; turning to sustainable debt repayment...

This year's G20 negotiations are more difficult than in previous years. Leaders of various countries not only have to face the tense trade situation, but the tensions between the United States and Iran are also rising day by day, and Europe is also expressing its demands on the issue of climate change.

Under the strong opposition of the United States, the leader's declaration of the "Osaka Declaration" once again, like the G20 summit in Argentina, did not include the words "against protectionism" and replaced it with "call for free and fair trade." The summit declaration stated that "we will work hard to ensure the openness of the market and realize a free, fair, non-discriminatory and transparent trade and investment environment." The countries also reached an agreement to reduce marine plastic waste to zero by 2050, and agreed to accelerate WTO reform.

In terms of curbing climate warming, according to Agence France-Presse, with the exception of the United States, which has withdrawn from the 2015 Paris Climate Convention, the other 19 heads of state reiterated their commitment to fully implement the Paris Climate Convention in the declaration. In this regard, French President Macron said that this is just to avoid the worst outcome and keep it from retreating. Macron pointed out that members of the G20 should go further. He promised that in order to go further, we will use all our energy and go all out.

In addition to the global warming issue, in terms of environmental protection, Kyodo News said that the heads of the 20 countries have basically reached an agreement on the "Osaka Blue Ocean Vision." Countries have pledged to reduce the discharge of plastic waste to the ocean to zero by 2050.

Kyodo News Agency said that the move appears to be aimed at China, which is promoting railway and port construction in these countries. As for "industrial subsidies" related to overproduction of iron and steel, which are intended to restrict China's unfair trade, the heads of the 20 nations started discussions in the direction mentioned in the declaration.

The trade war suspends the fire after the Sichuan-Xi meeting

US President Trump (Trump) and Chinese President Xi Jinping held the Sichuan-Xijiang meeting in the G20. It is a matter of whether the US-China trade war can cool down, which has become the top priority of this G20 summit. Sichuan and Xi’s talks lasted for about 80 minutes. After the meeting, the two sides reached an agreement to resume trade negotiations and that the United States would not impose new tariffs.

Trump said at a press conference after the closing of the G20 that in addition to not imposing an additional US$300 billion in tariffs on Chinese goods, he also agreed to Huawei's purchase of "non-national security" components from US companies. But Trump said that the Huawei issue will be kept until the final stage of the US-China negotiations.

When asked by reporters what type of US-China relationship is, Trump said that each other can help each other and the two sides can be "strategic partners," but he also said that China is not fully open to the United States, which is unacceptable.

Trump talks about the murder of Khashoggi

Trump held a sideline meeting with Saudi Arabia's Crown Prince Mohammed bin Salman on Saturday. After the incident, Trump was asked by reporters if he talked about the murder of Saudi Arabia’s dissident reporter Jamal Khashoogi. Trump said he did raise strong concerns when Salman’s face was raised; but when asked about the US intelligence agency’s When there was evidence that the murder was ordered by Salman, Trump said that he could not comment on intelligence matters.

Bilateral talks between US and Russian heads of state

Prior to the summit, Putin accepted an interview with the Financial Times and praised President Trump as a "talented" person. He said that although he is a politically veteran, Trump knows how to interact with voters.

During the summit, Trump held talks with Russian President Putin to discuss the situation in the Middle East and Russia's interference in the US election. Trump also praised Putin and told Putin "don't interfere in the (US president) election."

The Russian side said that Putin invited Trump to go to Moscow in May next year.

See you on the border between North Korea and South Korea

Trump tweeted during the G20 period, hoping to meet and shake hands with North Korean leader Kim Jong-un in the Demilitarized Zone (DMZ) on the border between South and North Korea during his visit to South Korea on the 30th.

In answering reporters, Trump also said that he was willing to visit North Korea, "I will be very pleased if it can be done, I have no problem at all."

NATO ally Turkey's purchase of S-400 air defense missiles from Russia has aroused dissatisfaction with the United States. It is worried that Turkey's simultaneous use of US and Russian equipment will cause important parameters of the F-35 fighter to be drained. Trump has a sideline meeting with Turkish President Alduan this time to discuss a solution.

Trump said that during the administration of former President Obama, Turkey was not allowed to purchase Patriot air defense missile systems, which caused Turkey's pipa to stay away from it. Washington is studying different solutions. Trump also revealed that he did not rule out the suspension of the sanctions that Turkey plans to impose on the purchase of Russian-made missiles.

On his way to Osaka this time, Trump criticized India's imposing tariffs on US goods as "unacceptable and must be revoked." He also stated that if an agreement is not reached, tariffs will be imposed on Japanese cars in November.