The deadlock and significance of the Sino-US Tianjin talks

20210726 The second senior diplomat of the U.S. State Department - Deputy Secretary of State Wendy Sherman, after pre-arranged visits to Tianjin, was cancelled, and then the temporary arrangement was finally held in Tianjin with Chinaí»s Deputy Foreign Minister Xie Feng in charge of the United States During the four -hour closed-door meeting, Sherman also met with Chinese State Councilor - Foreign Minister Wang Yi.

The Tianjin talks are a continuation of the last time that the highest diplomatic official in charge of China Yang Jiechi and Foreign Minister Wang Yi had a poor meeting in Alaska.

The following are the press releases issued by each after this meeting: 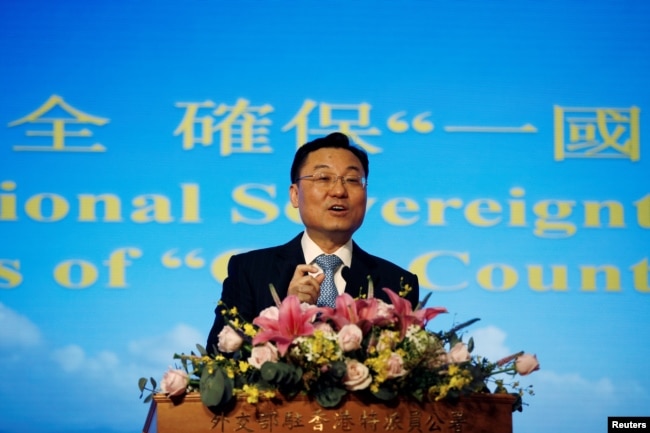 1. Xie Feng stated at the post-conference briefing that Chinaí»s í░correction checklistí▒ includes: removing visa restrictions on CCP members and their families, lifting sanctions on Chinese leaders, officials, and government departments, and canceling visas for Chinese students. Restrictions, stop the "suppression" of Chinese companies and the "nuisance" of Chinese students, abolish restrictions on Confucius Institutes, revoke the registration of Chinese media as í░foreign agentsí▒ or í░foreign missionsí▒, and revoke the chief executive of Huawei Group The extradition of financial officer Meng Wanzhou, etc.

2. Spokesperson of the Chinese Ministry of Foreign Affairs: Chinese Foreign Ministry spokesperson Zhao Lijian said at a regular press conference that on the whole, the talks were in-depth and frank, which enhanced their understanding of each otherí»s positions, and expressed their interest in the next stage of China and the United States. The healthy development of relationships is beneficial.

Zhao Lijian said that the US Deputy Secretary of State's visit is still in progress, and China has already issued relevant news releases. During the talks between the two sides, the Chinese side faced the problems in the relations between the two countries, clarified Chinaí»s attitude and position on the development of Sino-U.S. relations, clearly opposed the U.S. interference in Chinaí»s internal affairs and harmed Chinaí»s interests, and clearly requested the U.S. to change course and correct its mistakes. At the same time, the two parties also had an in-depth exchange of views on a wide range of topics of mutual concern.

Zhao Lijian said that the United States seeks Chinaí»s cooperation and support on issues such as climate change, Iran and the North Korean nuclear issue. "In fact, China has always played a constructive role responsibly on these issues. What needs to be emphasized is that cooperation needs to be based on mutual trust, on the premise of mutual benefit, and with a good atmosphere of bilateral relations as a necessary condition. The United States should establish the right conditions. Chinaí»s view of cooperation means that you cannot seek cooperation while harming Chinaí»s interests. This will not work."

Zhao Lijian said that during the talks, in addition to expounding its principled position on Sino-US relations and urging the US to change its extremely erroneous perception of China and its extremely dangerous China policy, China also focused on the USí»s tracing of the source of the new crown virus, Taiwan, Xinjiang, and other issues. The wrong words and deeds on the Hong Kong, South China Sea and other issues once again expressed strong dissatisfaction to the United States, demanding that the United States immediately stop interfering in China's internal affairs, stop harming China's interests, stop stepping on the red line and playing with fire, and stop engaging in group confrontation under the guise of values.

"We urge the United States not to underestimate the strong determination, firm will, and strong ability of the 1.4 billion Chinese people to safeguard national sovereignty, security, and development interests. On the whole, the talks have been in-depth and frank, and have enhanced their understanding of each otherí»s positions. The healthy development of Sino-US relations in the next stage is beneficial." Zhao Lijian said. 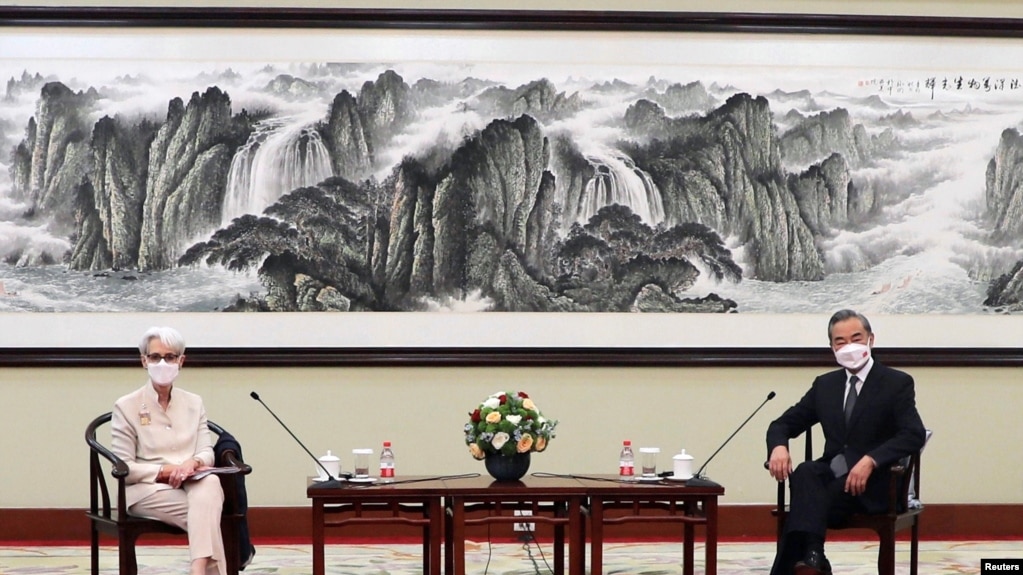 3. The press release issued by the Office of the Spokesperson of the U.S. State Department reads:

US Undersecretary of State Wendy Sherman on 7 Yue 25 Ri Zhi 26 Ri went to People's Republic of China, met with State Councilor and Minister of Foreign Affairs Wang Yi and other Chinese officials. The Deputy Secretary of State expressed sincere condolences to those who lost their lives in the devastating floods in Henan Province this week. The frank and frank discussions with the State Councilor and Minister of Foreign Affairs of China on a series of issues demonstrated the importance of maintaining open channels of communication between our two countries. They discussed how to set conditions for the responsible management of US-China relations. The Deputy Secretary of State emphasized that the United States welcomes the fierce competition between the two countries and we intend to continue to strengthen our competitiveness, but we do not seek to conflict with China.

As we have done in public, the Deputy Secretary of State has privately expressed concern about a series of actions by China that violate the values and interests of us and our allies and partners and undermine the rules-based international order. In particular, she raised our concerns about human rights, including Beijingí»s anti-democratic repression in Hong Kong; ongoing genocide and crimes against humanity in Xinjiang; abuses in Tibet; and restrictions on media access and freedom of the press. She also talked about our concerns about Beijingí»s behavior in cyberspace; across the Taiwan Strait; in the East China Sea and the South China Sea.

The Deputy Secretary of State also referred to cases of U.S. and Canadian citizens being detained in China or prohibited from leaving the country, and reminded Chinese officials that people are not bargaining chips. The Deputy Secretary of State reiterated concerns about China's unwillingness to cooperate with the World Health Organization and allow the second phase of investigation into the source of COVID-19 in China . At the same time, the Deputy Secretary of State affirmed the importance of cooperation in areas of global concern such as the climate crisis, drug control, non-proliferation, and regional issues such as North Korea, Iran, Afghanistan, and Myanmar.

According to the results of the official talks of the above two countries, there were no breakthroughs and consensus on many issues during the talks, that is, the gap between the two sides is very large, so this talk is still one of the deadlocks. This stalemate can be predicted in advance. One of the reasons is that Sino-US relations under Trump have rapidly deteriorated with the start of the trade war. After the Biden administration came to power, it deliberately implemented a three-point strategy of "confrontation - competition - cooperation" towards China. Previously, the U.S. State Department had stated that Schumanní»s visit to China would discuss with China issues that arouse serious concerns from the U.S. in Chinaí»s actions, as well as discuss the convergence of interests of both parties. A spokesperson for the State Department said at the time that the United States supports fierce competition between the two sides, but hopes that the competition will be fair, especially not turning into conflict. The second reason is that since the Biden administration took office in 20210120 , it has not sent an ambassador to Beijing, China, and China has not sent an ambassador to Washington after the former Chinese ambassador to the United States announced his retirement and resignation in the previous stage. On the contrary, in the past six months or so, the relationship between the United States and "Taiwan" has become warmer and is developing in the direction of official exchanges, and military aircraft has been used to transport three Congressional officials to "Taiwan" to deliver vaccines. Military aircraft have entered Taiwan three times. It was stated twice that the personal belongings of US officials stationed in Taiwan were transported. The strange thing is, why does the US use military aircraft instead of civilian aircraft? Obviously it is stamping on the red line that China has already drawn. The red line that People's Daily Overseas Editor Hu Xijin has said many times is that if US warships or military planes dock or enter Taiwan, it is the beginning of the military reunification of Taiwan.

Against the background of the huge gap in the aforementioned bilateral diplomatic talks and the incoordination, it is understandable that the talks have relapsed because of the huge gap between the social systems and ideologies of the two countries, and it is almost impossible to unify the thinking.

Now let's look at the significance of this meeting. It is better to have talks than not to talk about no contact. This is mainly because the two sides can at least maintain contact, because this is a ministerial-level talks, and the next step is the heads-of-state talks. Maybe U.S. President Biden and Chinese President Xi Jinping may meet. in the year 10 end of the month to be held in Rome, Italy, 20 meetings during the summit of the Group.

Now ití»s not a bad thing for both parties to touch each otherí»s hole cards first, because after each knows the otherí»s hole cards, they can see what can be adjusted in the reciprocal relationship. After all, both China and the United States are big countries and are the top two in the global economy. Cooperation is always better than confrontation.

OFFICE OF THE SPOKESPERSON

The below is attributable to Spokesperson Ned Price:

Deputy Secretary of State Wendy Sherman traveled to the Peopleí»s Republic of China for meetings with State Councilor and Foreign Minister Wang Yi and other PRC officials from July 25-26.  The Deputy Secretary expressed the United Statesí» sincere condolences for the lives lost in the devastating floods in Henan Province this week. The Deputy Secretary and State Councilor Wang had a frank and open discussion about a range of issues, demonstrating the importance of maintaining open lines of communication between our two countries. They discussed ways to set terms for responsible management of the U.S-China relationship. The Deputy Secretary underscored that the United States welcomes the stiff competition between our countriesí¬and that we intend to continue to strengthen our own competitive handí¬but that we do not seek conflict with the PRC.

The Deputy Secretary raised concerns in private ¿C as we have in public ¿C about a range of PRC actions that run counter to our values and interests and those of our allies and partners, and that undermine the international rules-based order. In particular, she raised our concerns about human rights, including Beijingí»s anti-democratic crackdown in Hong Kong; the ongoing genocide and crimes against humanity in Xinjiang; abuses in Tibet; and the curtailing of media access and freedom of the press. She also spoke about our concerns about Beijingí»s conduct in cyberspace; across the Taiwan Strait; and in the East and South China Seas.

The Deputy Secretary also raised the cases of American and Canadian citizens detained in the PRC or under exit bans and reminded PRC officials that people are not bargaining chips. The Deputy Secretary reiterated concerns about the PRCí»s unwillingness to cooperate with the World Health Organization and allow a second phase investigation in the PRC into COVID-19í»s origins. At the same time, the Deputy Secretary affirmed the importance of cooperation in areas of global interest, such as the climate crisis, counternarcotics, nonproliferation, and regional concerns including DPRK, Iran, Afghanistan, and Burma.